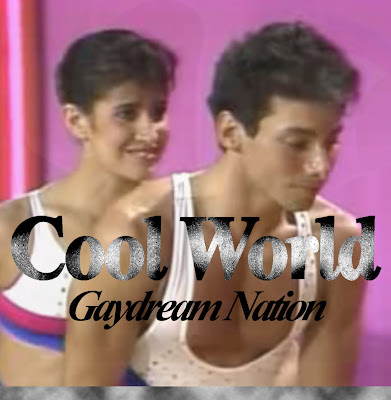 INSTANT SUMMER – One part heat, one part (see below):

MD PICK OF THE WEEK: COOL WORLD “Gaydream Nation” [Dœs Are] – Another JUICY and (gay)dreamy release from Dœs Are that sounds like the best summer backyard afternoon this side of the train tracks from Pete and Pete.

DARIUS’ PICK OF THE WEEK: DAVID BYRNE AND FATBOY SLIM “Here Lies Love” [Todomundo/Nonesuch] – The premise is unreal. Just a teaser: it has to do with the first lady of the Philippines and a beloved child servant. It’s conceptualized as absurdist disco theatre that sounds like the artists who composed it.

ELODIE’S PICK OF THE WEEK: WOODEN SHJIPS “Vol. 2” [Sick Thirst] – The sound crosses the icy garage rock of early Echo and the Bunnymen with the sun bleached tremolo pun of the Scientists. This has hints of Krautrock, the trance inducing organ haze of Suicide, Velvets-style dance drone, and classic desert fried garage psych.

OTHER DREAMY ADDS TO THE PLAYLIST:

AWESOME COLOR “Massa Hypnos” [Ecstatic Peace] – You know, it’s awesome and it’s color, hence awesome color. We almost had a seizure of joy when they played in the college center MPR.

COCONUTS “CoConuts” [No Quarter] – Under “Sounds Like” on their MySpace, there was this quoted comment: “Waiting to see Austin hardcore/power violence Total Abuse at 12.15pm we’re discombobulated by the arrival of gurning, staggering, dribbling Aussies, The Coconuts. They seem to further bamboozle the crowd by tuning up for longer than they actually play their horrendously loud psychedelic horseshit. The crowd, possibly put off by their unannounced arrival and level of noise, mixed with their high level of chemical induced ineptitude, doesn’t appear too impressed. Despite this, The Coconuts are actually pretty good.”

GROWING “Pumps” [VICE Records] – Full of drum machine rhythms and layers of vocal and guitar textures. It munches on a heavy diet of scattershot and deconstructed electronic snax.

JÓNSI “Go” [XL Recordings] – Jonsi is the frontman for Sigur Ros. It is the soundtrack to a beautiful creature’s face. Just play it.